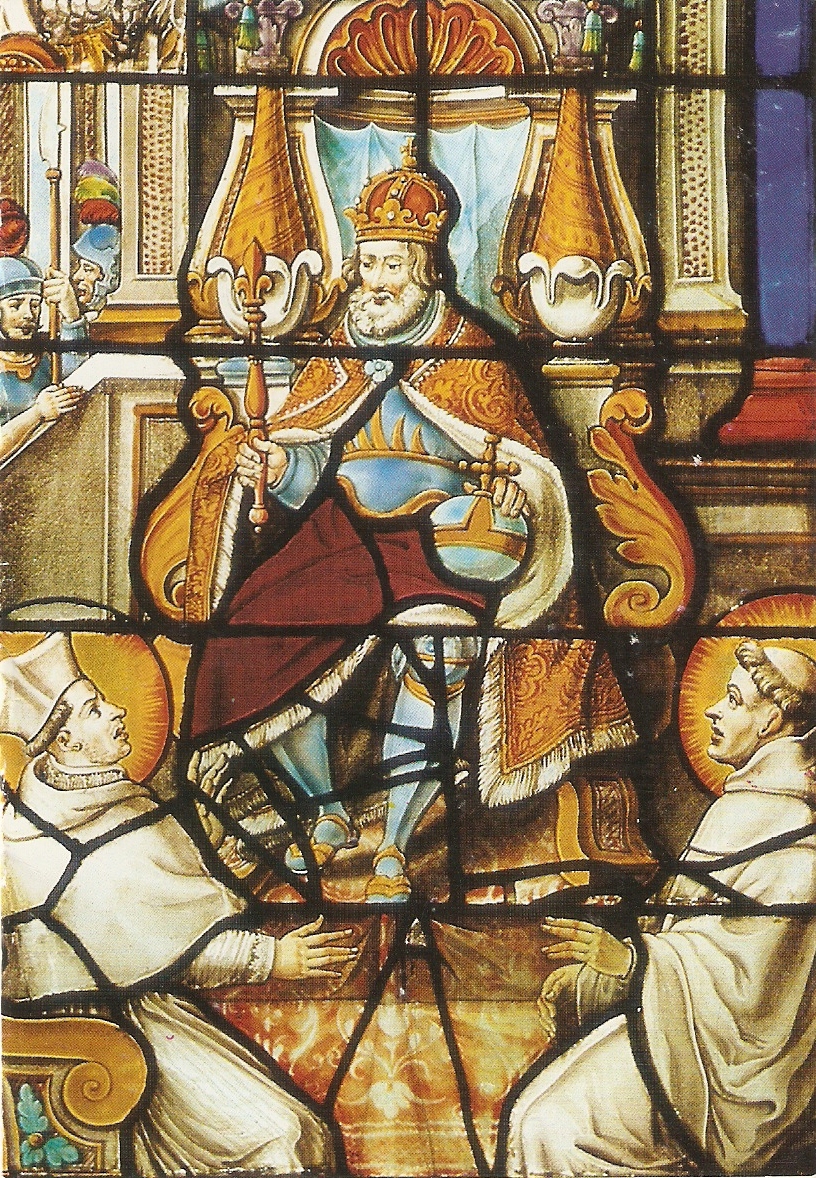 SS. Norbert and Bernard meet with the Emperor Lothair (from a window at Park Abbey, Belgium)
Today we keep the memorial of Saint Bernard of Clairvaux, the noted Cistercian abbot.Both Bernard and Norbert worked hard for the reform of the Church and the religious life during the twelfth century.The two saints are said to have met for the first time at the Cistercian abbey of Foigny in the diocese of Laon (where Prémontré was also situated) and both were present in Laon itself for the transfer of the abbey of St. Martin to the Premonstratensian Order.Bernard wrote of his time spent in Norbert's company:

"I was able to see him [Norbert], the other day, and was honoured in being permitted to drink from that heavenly fistula, that is, the words from his lips." [Letter to Geoffrey, Bishop of Chartres, 1124]"My advice is, you have near you Lord Norbert. You can ask him about these difficult matters, since he is more easily able to discover these divine mysteries, being, as we know he is, nearer to God than ourself." [Letter to Bruno of Altena, Archbishop of Cologne]

Norbert also held Bernard in high esteem and the life of the Cistercians had a great influence on Prémontré. Both saints also opposed the antipope Anacletus and upheld the rightful election of Pope Innocent II and argued the case of the true pope before Emperor Lothair. After Norbert's death Bernard remained in contact with the Premonstratensians and wrote to Blessed Hugh, the first abbot of Prémontré as well as Count Theobald (the first member of the Third Order). Vita B remarks:

"Faith was the outstanding virtue of Norbert’s life, as charity had been the hallmark of Bernard of Clairvaux"

As evidence of his high regard for Norbert's order St. Bernard wrote to The Queen of Jerusalem, Milisende, in 1142;

"It would be as unnecessary as presumptuous, perhaps, for me to say much in recommendation of these brethren of Prémontré, for they so commend themselves by their own merit that they have no need of recommendation by another. They will be found, if I mistake not, to be men of wisdom, strong in spirit, patient in tribulation, powerful in word and work. They have put on the whole armour of God and have girded themselves with the sword of the Spirit, which is the Word of God, to fight not against flesh and blood, but against spiritual wickedness in high places."

St Bernard, friend of Our Holy Father Norbert, pray for us!

If you have any questions or are interested to learn more about our vocation, please contact us.